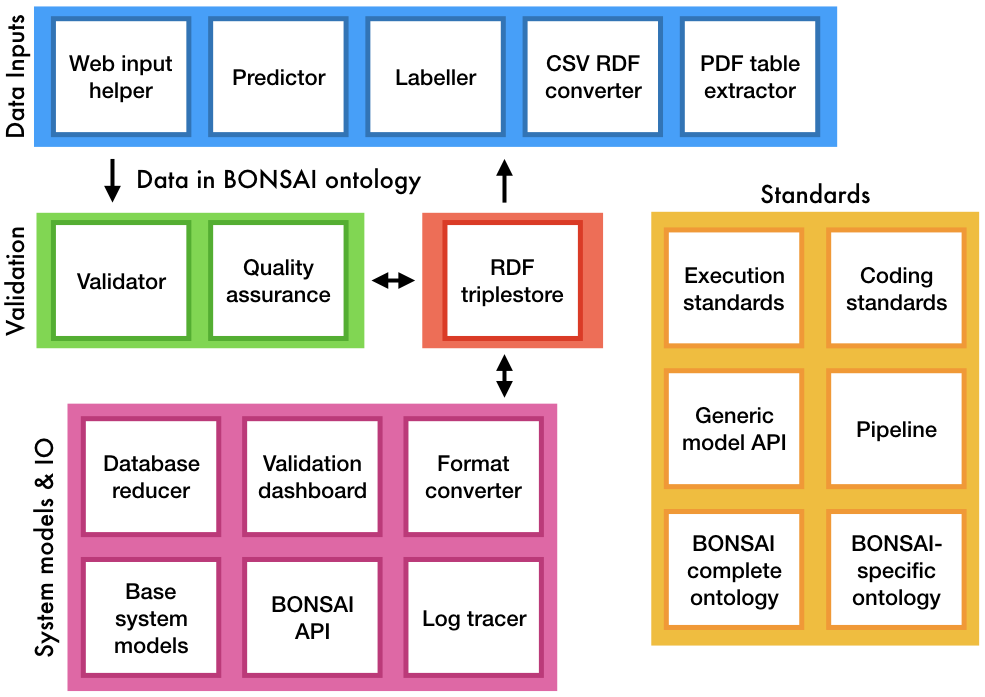 While planning for the BONSAI hackathon, and what should come after it, I have become more confidant that we can both produce something which is a substantial advancement over the status quo, and that it can proceed piecewise, with each new component adding to the overall system. As such, I put together the following modular system components which I would prioritize for the next year of BONSAI development. Most of these components will build on other BONSAI components libraries or standards.

Predictor: Given an industry or product classifier, list the most important predicted inputs (based on a suite of environmental indicators) and approximate input amount ranges based on existing datasets. Can also highlight inputs which only show up in IO tables and not in process-based inventories.

Labeller: Guess labels from BONSAI product and industry names based on a machine learning classifier. Keeps original data, just adds new columns. Takes CSV or RDF as input. Training data will come from the descriptions and documentation of the ontologies.

CSV RDF converter: Converts data from labelled CSV to an RDF file following the BONSAI ontology set that can be read directly into e.g. Apache Jena

Validator: Validates RDF files for the BONSAI ontology set. We need a relatively strict validation, as we want to limit the types of input data available so that our algorithms can know what to expect when processing data.

The master database that stores data following the BONSAI ontology. Unclear at this stage if we will include much logic in the database itself; it might be easiest for the current group to extract data, process in e.g. Python, and then write the processed data back to the triplestore.

An instance of Apache Jena for BONSAI is already running at the University of Aalborg.

Execution standards: How to package an LCI/LCIA model as an executable in a container.

Generic Model API: Generic interface for LCI models which follow the coding standards that allows them to be hosted web services

Pipeline: A simple markup language (built on top of existing data pipeline tech and standards) that allows for input pre-processing using other BONSAI components, LCI model execution, system model execution, output processing, and finally creation of a BONSAI result. Eventually this will be the way that anyone can build their own BONSAI model/database/IO table.

Base system models: One or more consensus system models, initially built on top of PySUT, which reconcile data points, create supply and use tables, and then create input-output tables.

Log tracer: Traces the calculation history of each result data point back to its origin.

The following are currently listed as hackathon outputs (as first versions):

This is a first draft of what BONSAI could look like, and is dependent on what the community wants to build. I have developed a draft formal process for community decision-making, and this may or may not be adopted. In any case, BONSAI is built by people volunteering their time and ideas.